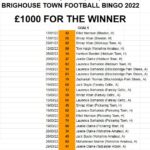 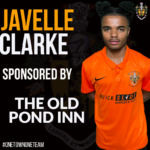 TOWN CONTINUED their six-match unbeaten run with a 3-2 home win over relegation threatened Lincoln United to take them to eighth place in the table but agonisingly short of making the play-offs.

Eight draws and some at the death defeats have robbed them of staking a claim to pursue a Premier Division place for next season.

Against Lincoln, Town were in the lead after just 12 seconds as leading goalscorer Laurence Sorhaindo was gifted a great ball from the kick off into the box and his shot just glanced a defender and was in the net to shock all and sundry in the ground.

The visitors were level aft 19 minutes when Max Baker beat everyone in the box to a cross and leave Town keeper Brett Souter gasping fresh air.

Town lost their experienced centre half James Hurtley with a though injury after 27 minutes, Harry Wilkinson coming on in his place.

Both sides had chances up to the break and it was a tight affair into the second period until manager Vill Powell brought on some fresh legs.

Zander Edwards and Redmond Lee added some pace and gaps were appearing in the Lincoln defence.

Town restored their lead in the 76th minute when Jack Boyle was brought down in the box and Sorhaindo stepped up to blast home the spot kick,

Two minutes later and Boyle beat Jack Steggles with a 25 yard left-footer that gave him no chance to make it 3-1.

Lincoln were awarded a penalty with three minutes left on the clock and Matthew Cotton sent Souter the wrong way, and some anxious moments then followed. However, Town with defenders Mohammed Ibrahim, Sam Reed and Harrison Reed ensured the three points were justifiably banked.

TOWN MADE it seven games unbeaten at Bridlington on Tuesday night as they defeated the relegation-threatened seasiders 4-1.

Manager Vill Powell had to make four changes from the Saturday with Elliot Harrison and Laurence Sorhaindo fulfilling holidays they had booked when thinking it was a clear week on the fixtures and with centre back James Hurtley (thigh) and fullback Sam Reed (flu) also ruled out.

The original fixture back in mid-February was snowed off after the team had travelled. The end result on Tuesday night showed clearly the developing in strength of Powell’s squad but the run has come just too late for the club to make the play-offs.

Town were on the board after 12 minutes when a Harry Wilkinson header was handled on the line by left fullback Benn Lewis and Northallerton referee Jonathan Gill showed him an immediate red card. Jack Boyle stepped up and give home keeper James Hitchcock no chance with his fiercely driven spot kick.

Two minutes later and Town were two goals to the good when man of the match Javelle Clarke dinked a lovely ball on target and HItchcock could only flap at it and on hand was Redmond Lee to steer home the ball and his first goal for the club.

The home side, boosted with two players on loan from Hull City and in ex-professional striker Brett Agnew free of his managerial shackles after resignation, lifted their game in the hope of reducing the two-goal cushion Town had, but keeper Brett Souter was hardly in action as Joshua Grant, Harrison Beeden, Wilkinson and Corey Gregory worked tirelessly across the pitch while Mohammed Ibrahim, Clarke and Darius Smith took the ball forward.

Town made their first substitution after 56 minutes when experienced Zeph Thomas came on for Lee.

The scoreline remained 2-0 until the 70th minute when Clarke came in from the left, beat two defenders and turned a third and then let fly from 15 yards out to find the net.

Zander Edwards for Boyle and then Alex King for Darius Smith followed in the next five minutes as Powell went for fresh legs.

In the 83rd minute Bridlington pulled a goal back through subsititute Andy Norfolk, but four minutes later former full time professional striker Thomas hit a trademark goal from 20 yards out to seal the game and points for in form Town.

On Saturday, Town travel to another struggling side in Sheffield FC, England’s oldest club, (3.0), and on this showing as players come back the manager will have a selection headache.