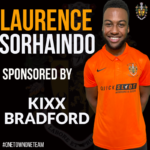 A GOAL either side of half-time at Tadcaster Albion on Tuesday night was enough for Town to continue on their good run up the table.

The 2-1 scoreline was not a true reflection of the game after the first 20 minutes as Town were well in control.

They had gone behind to a controversial 15th penalty converted by Mark Ferguson and failed to convert their own spot kick award after 32 minutes for hand ball. Albion’s 17-year-old loanee goalkeeper from Hull City, Harry Fisk gave a hint of what was to come for the rest of the half and certainly in the second 45 minutes. He saved Laurence Sorhaindo’s spot kick and then went on to deny Town with some brilliant saves.

Town did equalise in the 41st minute when Javelle Clarke fired in after the ball had been parried out and a defender failed to clear.

Three minutes into the second half leading goalscorer Sorhaindo made amends with a superb goal from 20 yards out. He saw off three defenders, turned and then sent a bullet of a shot flying beyond the reach of Fisk.

Then it was the `Fisk Show’ after that as accurate shots targetted his domain. He denied Jack Boyle with two superb one hand saves, Tom Haigh, Sorhaindo, Clarke and Corey Gregory. The scoreline by the 80th minute could easily have been reading 7-1!

Town have secured another three players for next term on top of tying down leading goalscorer Laurence Sorhaindo and tigerish, yet skilfull midfielder Corey Gregory two weeks ago.

Skipper and midfielder Thomas Haigh is on board along with wide player Javelle Clarke who was monitored pre-Christmas by National League Woking and striker Jack Boyle who ahead of coming to Town two years ago was on the books of Clyde and Huddersfield Town.

The way the team is playing at the moment suggests other players are pressing to be on the retained list.

Last Saturday af Yorkshire Amateur club in the Harehills district of Leeds, Town came away with an excellent 3-1 victory to take them well into mid-table and with five matches left the opportunity to press for a higher place than 10th in the table pre-Tuesday night’s rearranged game at Tadcaster Albion.

After 12 minutes Town were a goal down when from a corner that went across the face of the goal, former Gibralter international and Farsley Celtic striker Adam Priestley lashed at the ball and it came off Town defender Harrison Beeden and beat Michael Acquah

Town’s heads didn’t go down and they started to attack the home goal. A ball into the box from the right was just too high for Sorhaindo to head on target but it dropped perfectly for Javelle Clarke to latch on to and drive into the net.

On half-time, and a perfect time to score, Jack Boyle was on hand to drive home a ball into the box and make it 2-1.

Town took control of the second half and could have had several goals but had to settle for a third on 63 minutesd from right wing-back Mohammed Ibrahim who came into the box and then sent a firece shot into the back of the net.

Town’s workaholic frontman Elliot Harrison, easily man of the match, was denied a penalty when pushed over going in on goal. Substitute Zander Edwards on two occasions, after great skill and pace, could have added to the scoreline but wanted an extra touch too many and the chances were lost.

On Saturday for the visit of Lincoln United (3.0), Town are playing host to their main sponsors Quickslide Windows and Doors whose family and fiends from the workforce are coming in numbers to support the side.

They will be having a penalty shoot out and also be entertained at the end of the game by live band Psycoslinkys.