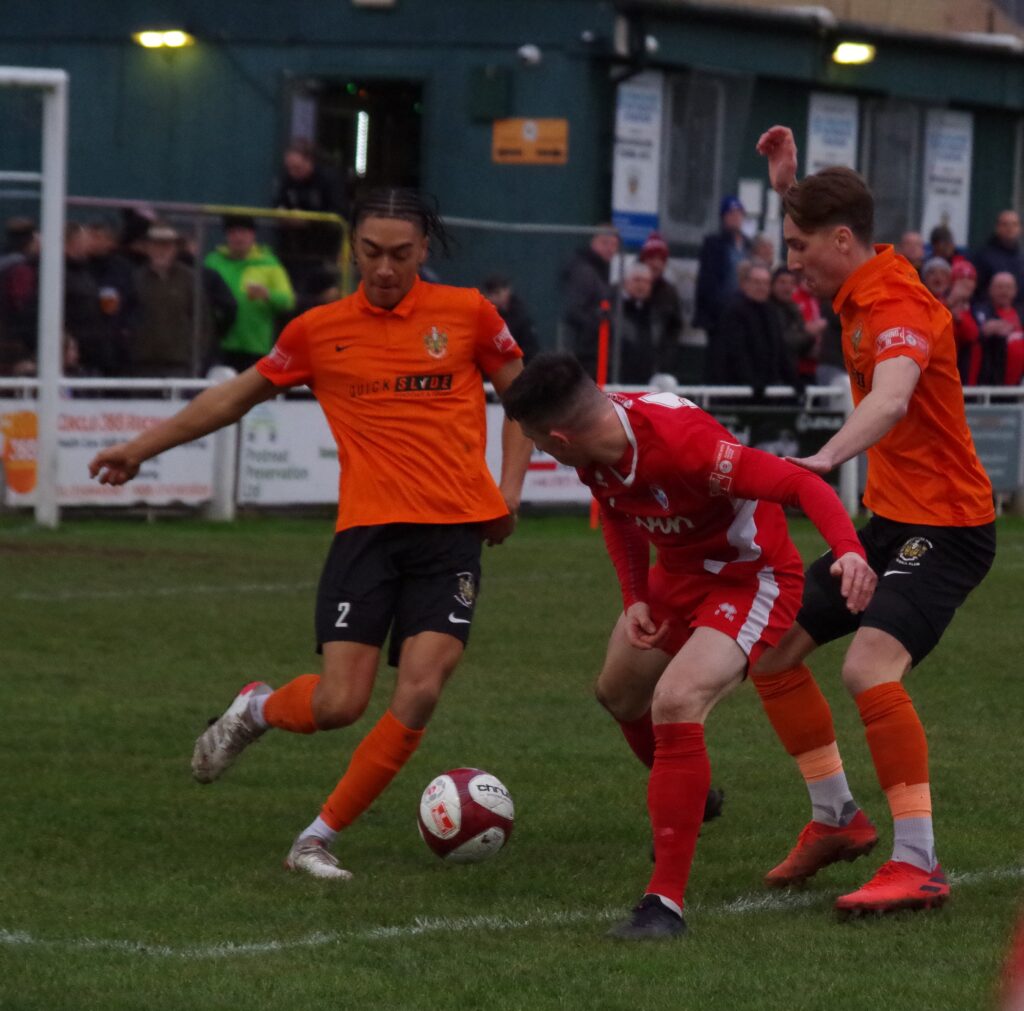 Despite plenty of goalmouth action, of which Town had the largest share against their fifth-placed opponents, the game looked to be heading for a goalless draw, when Josh Grant took the wrong option and Shildon whipped the ball into the six yard box. Substitute Dean Thexton went up to meet it, but, as on both club’s filmed coverage it showed the player handling the ball into the net!

Everyone of Town’s players raced to the assistant on the bottom side of the pitch who had given the referee the nod to give the goal. Referee Ashley Royston pointed to the centre circle and went to speak with his assistant and then reaffirmed his decision.

The Town players and their supporters were left speechless.

Town could have been at least three goals up in the first half and were denied two more golden chances in the second half by Shildon keeper Shaun Newbrook who dived across his goal line to keep out a Laurence Sorhaindo shot and then he denied the club’s leading goalscorer another goal with a tremendous save from a thumping 15 yarder, tipping the ball over the bar.

In the opening minutes of the first half skipper Tom Haigh just fired over the crossbar from 25 yards out, Sorhaindo minutes later from 12 yards was denied by a post and from the rebound Javelle Clarke just fired wide and remonstrated with himself for missing the target.

Assistant manager Stacy Reed commented:” It just wasn’t our day. Their keeper had a blinder, which shows who had the most shots on target and then they win it with the help of a hand.”

Town had to rule out debutant striker Redmond Lee ahead of the game when he suffered a leg injury in the warm up and Zeph Thomas came back from injury possibly a week early to take his shirt. Talented wide player Shiraz Khan also stood down with illness, which was not covid related.

There was a very good debut from right full-back and Leeds University student Elliot Bennett who has had trials with Derbyshire club Mickleover Sports. He was very commanding and his distribution was good.

For Saturday’s away trip to Worksop Town (3.0), who suffered a 2-1 reverse to Stocksbridge PS last Saturday after a good run taking them to sixth place, four places above Town, full-back Darius Smith could be back in action after an ankle injury has kept him sidelined for the past four weeks. It is doubtful if striker Jack Boyle will be back after an eye operation last week.

Tom Haigh has spent this week skiing with family in Zermatt but will be back in time to take his place in the line up.

There will be two charity matches of 60 minutes each on Sunday at the Yorkshire Payments Stadium in aid of the Marie Curie Cancer Trust.

The first game will kick off at 2pm and the sides will be made up of actors from soaps Emmerdale and and Hollyoaks along with former professional footballers, boxers and World No11 darts player Joe Cullen. Admission is £5 with U16s free and all the proceeds along with a raffle and auction will go to the charity. The licensed clubhouse will also be open for hot food and drinks.